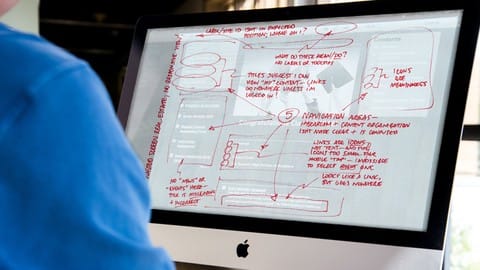 The faster, simpler way to quickly identify critical UX issues — just by looking at the UI.

“We really need to redesign this.”

As I’m sure you know, that’s code for “users are pissed off, management is pissed off and we don’t really know what the hell is wrong with this in the first place.”

So you need a fast, efficient way to figure out what’s wrong and what needs to be redesigned, because you can’t do it all with the time, budget or resources you have available.

And nobody’s gonna sign off on 3 weeks of user research or a formal UX audit.

Been there, done that, bought the t-shirt. But guess what? None of that is really a problem for you, and I’ll tell you why:

The real cause of the biggest problems users have won’t be found by researching or testing.

They’ll be found by taking a more critical look at the UI.

Why? Because 80% of what people have trouble with is almost always the result of bad UI design choices. Solve those, and the usability problems go away as well.

And I’m not talking about aesthetics or styling here — I mean the quality and effectiveness of the visual language users are presented with. You need to evaluate what they see and figure out where, how and why it’s tripping them up.

I designed this course to show you exactly how to do that.

We rarely have time to do it right.

Every week I get email from UX designers and developers, tasked with a UI redesign, who tell me two things:

Part of the problem here is that people on my side of the fence insist that UX audits have to be this massive undertaking, spanning weeks or months.

In a little over 40 minutes I’ll show you a huge list of common UX problems that show up in the product’s UI. They’re easy to spot, and you will find almost all of them in just about any customer-facing portal, website or B2B application you’re asked to redesign.

And after you’ve taken this course, you’ll be able to spot them easily in your next project.

What’s more, because I’m also going to walk you through the what and why of a UI redesign, you’ll know how to fix them.

The place to start is with what people see.

Here’s what we all forget: to most people, what they see on the screen IS the system. The UI is the sum total of their understanding about how this thing works.

For almost 30 years now, it’s been my experience that the majority of problems users encounter — the ones that cause them to make mistakes, abandon a task, or delete the app — come from bad design choices in the UI.

What you’ll learn applies to everything you’ll ever work on.

In just 90 minutes, I’m going to show you how to spot those bad choices, explain why they’re causing problems and show you the right way to redesign them.

That’s all the time it’s going to take to give you everything you need to do the same thing — in the same amount of time — on whatever you’re working on now or in the future.

What’s more, if you’re an independent business or freelancer, the things I’ll teach you here can help you land more work.

in the first part of the course we’ll walk through every screen in the portal’s core workflow one-by-one, identifying opportunities for UX and UI design improvement. Things that move the needle in terms of delivering something useful, usable and valuable to users:

So before we jump to redesigning something, we’re going to identify what problems need to be solved in the first place — and determine whether they’re worth solving at all.

Lessons 05 – 08: Redesigning for Context of Use (What to Redesign and How to Redesign It)

Next, we’ll redesign three (3) core screens from the portal’s main workflow. You’ll see exactly how we solve the issues identified in the first part of the course, and you’ll understand precisely why we made those decisions.

By the time we’re done, you’ll see the relationship between what’s on the screen and the underlying quality of the experience very clearly, and you’ll be able to apply what you’ve learned to anything you design or build.

You’ll also see how seemingly minute, inconsequential changes in the UI can make a world of difference in the depth of the user’s understanding and the quality of his/her experience.